This was over 20 years ago, and there’s no trace of any of this left so I figured I should write something before I forget it, too. This was before photos of everything. Before infinite digital archives. Another era.

Back in 1999, I was part of a team at an elearning company called Discoverware, building a multimedia platform to train people how to use various software applications.

One of the few traces of the company that remain in 2021, is a brief mention on Wikipedia’s History of virtual learning environments in the 1990s:

DiscoverWare, Inc. builds and begins to deploy its “Nova” course management system, involving a client/server architecture to deploy rich interactive content in a desktop application, and storing/sharing information on content, users, courses, and quizzes on a central server. This was an adaptive LMS, in that quizzes were generated based on the user’s progress through the content, and courses were generated based on the user’s responses to a quiz. The playback engine evolved a browser-based version that was SCORM Level 2 Compliant, enabling deployment of DiscoverWare content in third-party LMS such as Pathware.

I led the development of the core software, the part of the application that managed data and handled interactions and tracked state and activity data and communicated with servers (initially with our own server application, and then with Lotus Pathware and others through a SCORM engine I wrote to run in the browser). I also built the toolkit that was used by our team of animators - an easy to use drag-and-drop library of behaviours that they could easily add to content without knowing how to write any code. Another programmer led the interface design. A couple of others built the server. We did all of the client application development in Macromedia Director, and the server was all in Java. It was all cutting edge stuff for the late 90’s. We had big clients, including an international restaurant chain. Things were looking good. 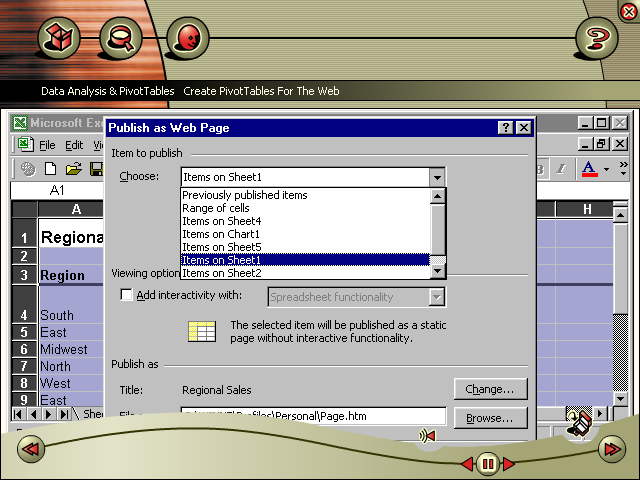 I also got to do some sales engineering, pitching in on product demos with potential clients. It was a great team, and we brainstormed ideas for companies that could make use of our software. I half-jokingly suggested Apple, who could use it to teach people about their new computers or the new software like iTools or iLife. We didn’t do anything with that initially, but I kept thinking about it. This was about a year after Steve Jobs returned to Apple as interim CIO, and lots of things were being announced.

So, one day, I wrote a 1-paragraph email to sjobs@apple.com, saying something profound like:

Hi, Steve. We’ve got a new multimedia platform for teaching people how to use software, and it might be useful to you at Apple.

Or somesuch. Paraphrasing from memory - the email is long gone to the ether.

I went home and didn’t think much about it. When I came in the next day, there was a response, cc’ed to a couple of people at Apple, asking us to come show the application.

So. I talked it over with the Art Director / Marketing Manager. We scraped up some budget to buy a couple plane tickets, I borrowed a fancy new toilet-seat-iBook so we could have something to demo with, and we headed to Silicon Valley. It was my first time to San Francisco, first time to Cupertino, first time on a legitimate business trip even.

We get to Cupertino, at the main lobby of one of the buildings of 1 Infinite Loop. We’re escorted to another building, up to a meeting room. We gave the demo, had a great meeting with some Apple folks, and then headed back to the hotel in San Francisco. I really, really wish I had some photos or even surviving notes from that trip.

Anyway. We didn’t end up building anything for Apple. But it was an amazing opportunity to share what we were building, and to meet many interesting people and learn about what they needed. And I got to visit San Francisco and Apple HQ just as things were taking off with the iMac/iBook/iLife reboot.

And I learned that sometimes it’s more effective to ignore protocol and pitch an idea. It would have been super easy for Jobs to a) have someone else read his email for him b) flag my email as spam c) not deem it worthy of a response anyway. Or all 3. But he did respond, with a single sentence, and connected me with people who might be interested.