We tried something new (for us) this year, and had an Ignite session during the Taylor Institute's annual conference. It was a risk, as we had never hosted that format before, and none of the 6 presenters (for 5 presentations) had ever done an Ignite. Nevertheless, we persisted.

I got talked into being the (humble) host for the event, introducing the format and acting as emcee between presenters. Each presenter provided their slides earlier in the week, so I had time to smush them all into one master presentation file and apply the automatic slide progression for their decks. 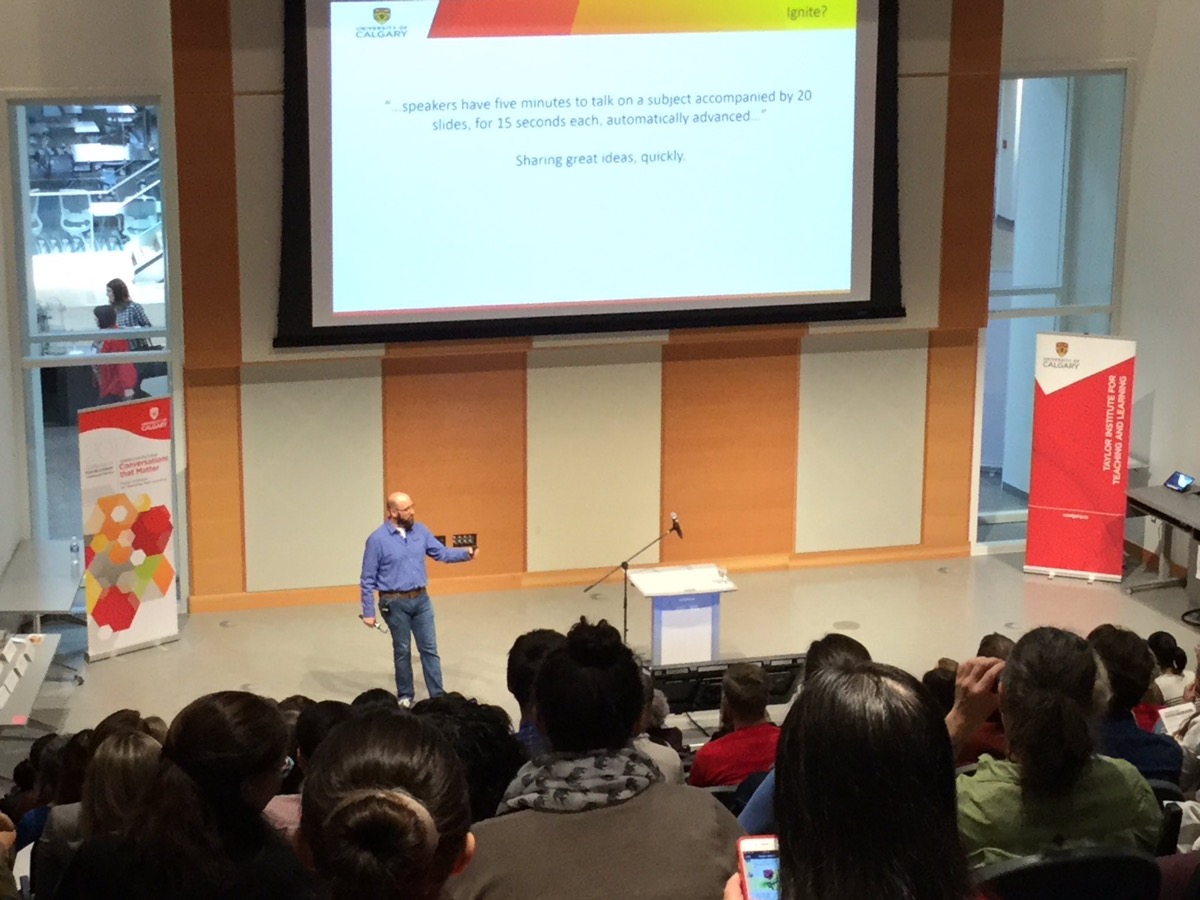 I have to say - I'm extremely proud of each of the presenters. They took a HUGE risk in trying the Ignite format, and they all nailed their presentations. The audience was very supportive and enthusiastic, and that led to some great presentations as the presenters fed on the energy and vice versa. I had meant to take some photos during the session, but being the emcee made that difficult. It was amazing.

I had never hosted an Ignite session, but would do it again in a heartbeat. Thankfully, I had the opportunity to give an Ignite presentation, at the Discovery Education Network's event at the Barley Mill back in May 2016. Dean Shareski hosted that session wonderfully, and I found myself channeling my inner Dean throughout our session.

The Ignite session format worked really well - we had 5 extremely diverse presentations - some technical, some philosophical - all in a keynote-style all-hands session, with all conference attendees gathered in the Forum to participate. I have to say - I love that conference style so much more than running 7 simultaneous tracks of longer sessions, which breaks up the community and spreads it into smaller pockets. There's a need for broad interdisciplinary coming-together, as well as deep context-specific being-together. 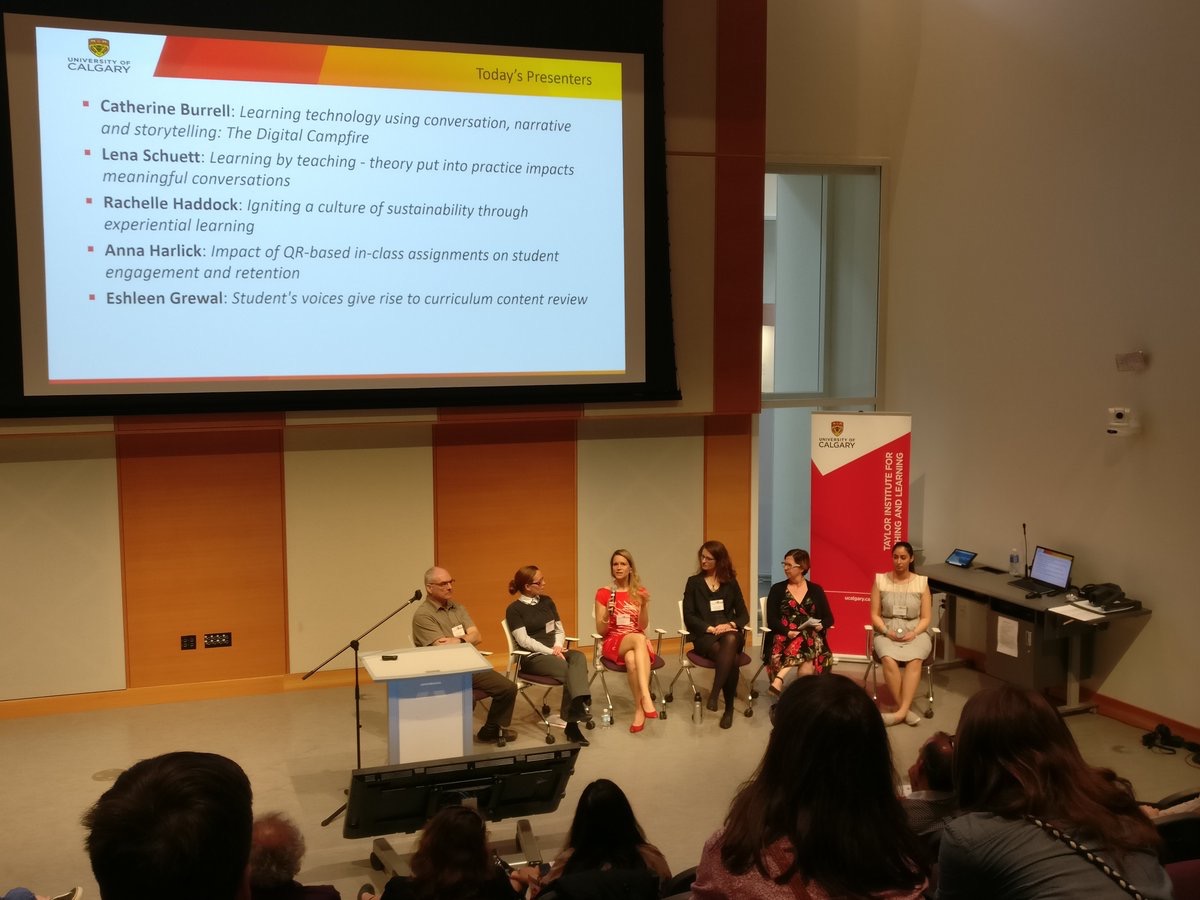 Photo (I think) by Jessica Snow[/caption]

Production notes from this… I sent out an intro and plan by email to the presenters a couple of weeks before the conference, outlining how the session would flow, and the technical requirements. I sent a couple of follow-up emails to make sure people felt comfortable, and to see if they had questions (and, nervously, to confirm that they were aware of the Ignite format).

All decks were created and submitted as PowerPoint files, and I created the master deck as a PowerPoint file as well. I asked presenters to stick to the 16x9 HD aspect ratio, but they were free to do whatever they wanted with their 20 slides.

There were some very minor technical glitches from combining all 5 presentations into a single deck. Each had used different themes, which meant fonts and colours were wonky in the master deck (I creatively used the "Office" default white template, to keep things neutral). Also, some slides had used background image rather than inserted images. Turns out, background images don't survive the combinification process intact. Not a big deal, but some manual futzing and recreation of images was required. I'm sure a PowerPoint expert would laugh and say "haha! Just click the 'don't mess up merged presentations' button!" (or some such). Whatever. You're not the boss of me. Copy/paste/fix/repeat/done.

For the master presentation, I had a few slides as an "Intro" section that described the plan, described what an Ignite-ma-thingy is, and then listed the 5 presentations. Then, each presentation had a title card that I added as an untimed padding to give people a chance to get set up before hitting "GO!". When they were ready, they gave me the signal, and I nudged to the first slide of their deck. 15 seconds later, auto-progression to the next slide, etc., through their whole deck. At the end of the 5 minutes, the presentation landed on a neutral untimed padding slide (with an abstract image), and a bell gave the signal that time was up. Quick emcee duties, transition to next presenter, and then "GO!" and they're off! Repeat until all 5 presentations are complete.

After the presentations were finished, Natasha took over as emcee, and masterfully led the question-and-answer and discussion. I had asked the audience to take notes of things they had questions about, were inspired by, or wanted to more about as the presentations flew by, so they would be able to remember their points during the post-discussion. This worked well - giving the prompt to remember questions led some to actually make note of things they wanted to ask, which led to a fantastic discussion.

Feedback from presenters and attendees was extremely positive. I think we'll likely be looking at trying the format again, if not expanding it in some way. Lots of ideas already…