I just pulled together photos from each day of 2016 - and realized I've been shooting at least one photo per day for a decade now. I didn't think I'd be able to keep doing it, but now can't imagine not doing it.

The latest gallery has 366 photos, due to the leap year. My photos have gone through artsy phases, and have pretty much settled into an informal documentary style. Lots of repeating shots over the years. Lots of progress shots - of people and places. This was the year of building the Taylor Institute for Teaching and Learning, installing a bunch of tech, and moving in. So, lots of photos of that.

Probably 99% of the photos are taken with my phone. The camera built into the iPhone 6 Plus is pretty decent. It's no DSLR, but it's always with me. Always. And optical stabilization helps. For the handful of photos that were taken with my over-a-decade-old Canon XT, the glass makes those photos much better. But I don't carry it around much anymore. One of the photos was taken with the software camera built into Forza Horizon 3 on XBox One. One was made with Gephi. So, whatever camera is handy… Photos are usually prompted by "hey, that's interesting", rather than being pre-planned or composed. Several of the photos appear trivial, but were taken before, during or after important conversations. 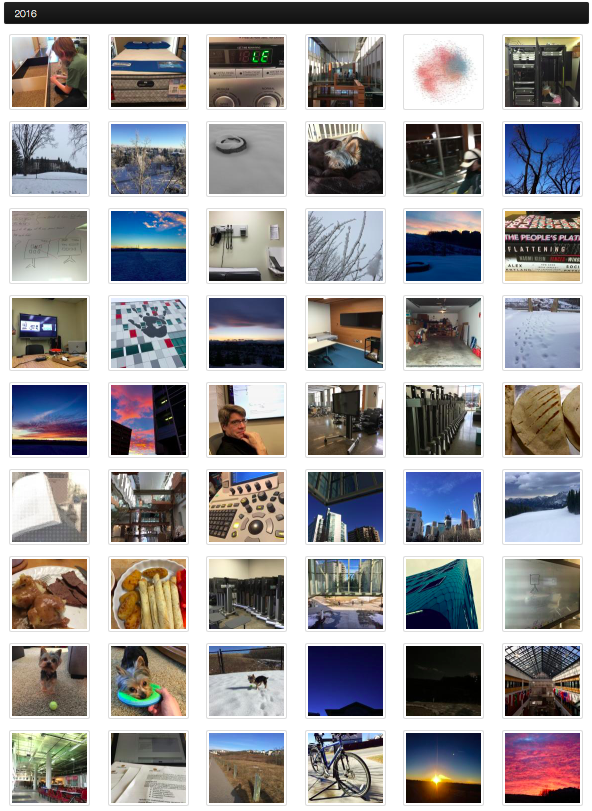 Here's to the next decade of daily photos…