I was asked what we needed to buy for instructors to explore integrating technology into their courses. Although we have many 3D printers on campus, I wanted one set up in the Educational Development Unit so that instructors could come and experiment with it in a safe place on neutral territory. I also wanted to expose people to an emerging technology so they would be able to incorporate it into their evolving understanding of literacy and of the types of things that are now possible. Simply having a 3D printer in the Unit would help even through simple exposure and osmosis. And, once people start to try things, there would be opportunities for cross-pollination and discussion beyond the simple technology. I also wanted to try something that wasn’t just replicating what was being done elsewhere on campus - we have some absolutely fantastic Maker spaces provided by our libraries, and several departments and faculties provide labs for student project development.

So I went looking for an option that was novel, inexpensive, and provocative. I wound up recommending the XYZPrinting Davinci All In One 1.0 - at about $800, it’s far cheaper than the Makerbot family. Reviews suggested the build quality was comparable with Makerbot-class devices, for a fraction of the cost. And the AIO includes a 3D scanner. That sealed the deal. A single device that is inexpensive, prints well, and includes a high resolution laser 3D scanner? Done.

After unboxing the printer, we set it up in our slowly-emerging Faculty Design Studio - a room in the EDU where instructors will have access to new technologies such as the 3D printer, Oculus VR, Wacom Cintiq tablet/screen, document camera, object scanning camera, etc…

It’s a big box - about the size of a microwave oven - but is really solidly assembled. The printing surface is glass, and is heated, so it’s relatively easy to remove printed objects without having to wrap the surface with a layer of masking tape or similar. And when you (gently) chip away the printed object, the glass provides a solid surface. 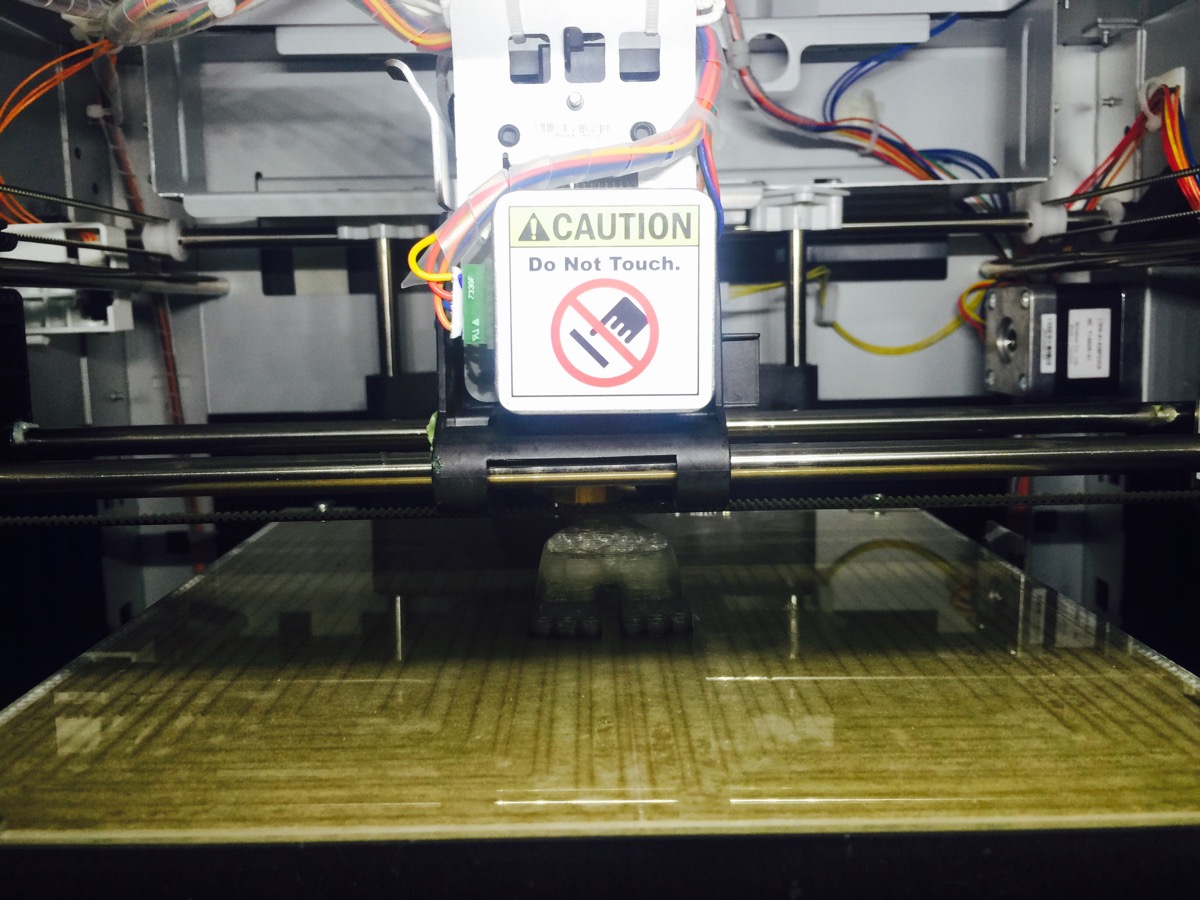 The software works on Windows or Mac, so I installed it on the Mac Pro in the studio, and plugged the printer into the USB hub. It was ready to print. The first print job was a simple cartoonish dinosaur model, downloaded from the XYZPrinting gallery. Worked like a charm. Next up, we tried some more complicated models, including a full model of a heart, a scaled-up tartigrade, and some small test pieces. Then, it was time to try out the laser scanner. 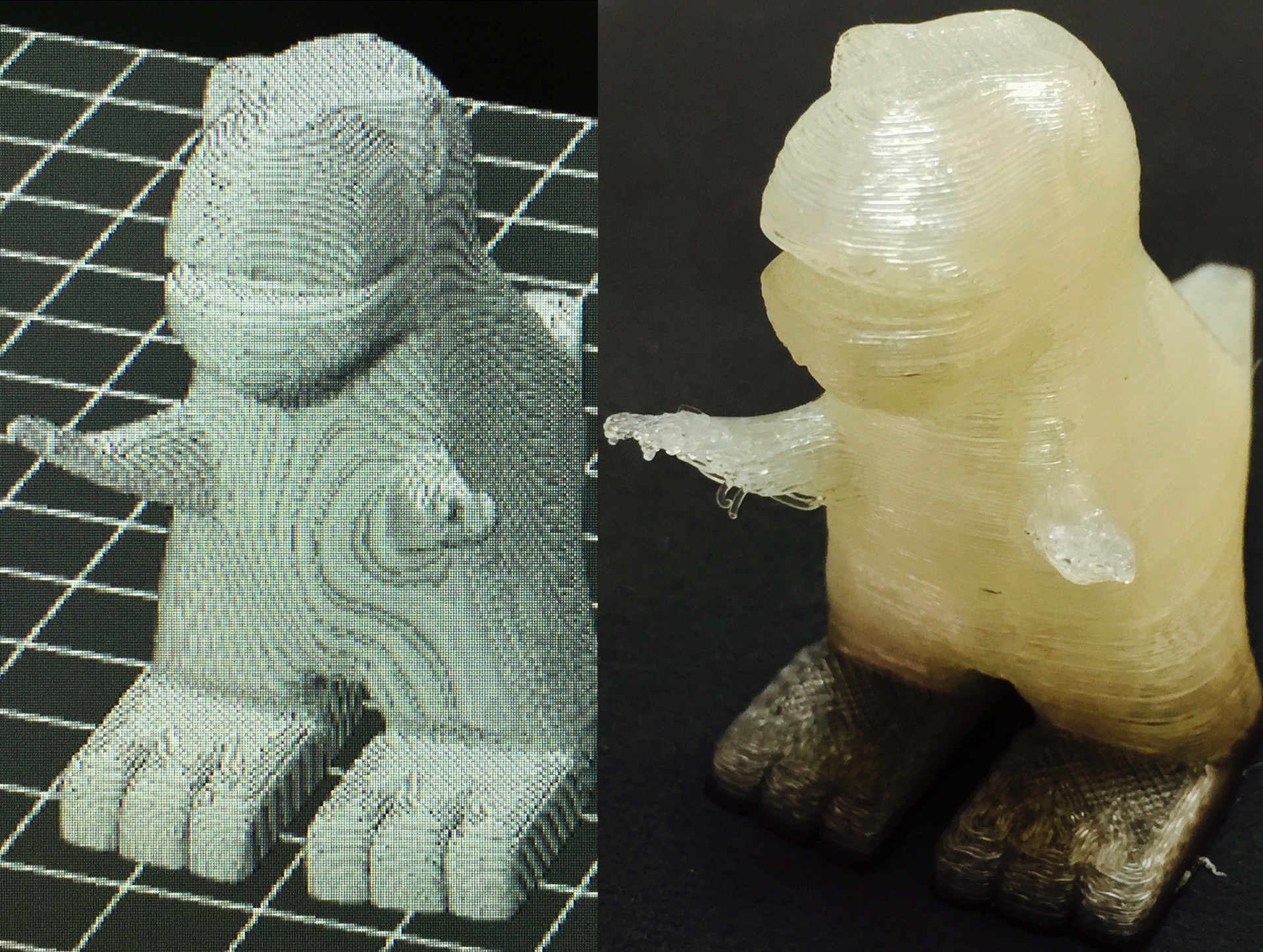 Nancy volunteered one of her Donny Darko bunny figures to be the guinea pig. I assured her the laser scanning was non-destructive, and that she’d get the little guy back, with a new friend, if everything worked out. Scanning only took a couple of minutes, and we could watch the figure as it rotated on the turntable, glowing under the lasers. Very cool. But, the first scan didn’t work out - the little guy was a touch too reflective. So I adjusted the scanner sensitivity and tried again. Success! I’ve now printed 2 copies of the bunny - they’re not perfect clones, but basic details are there. I need to try scanning at high resolution and printing at highest quality… 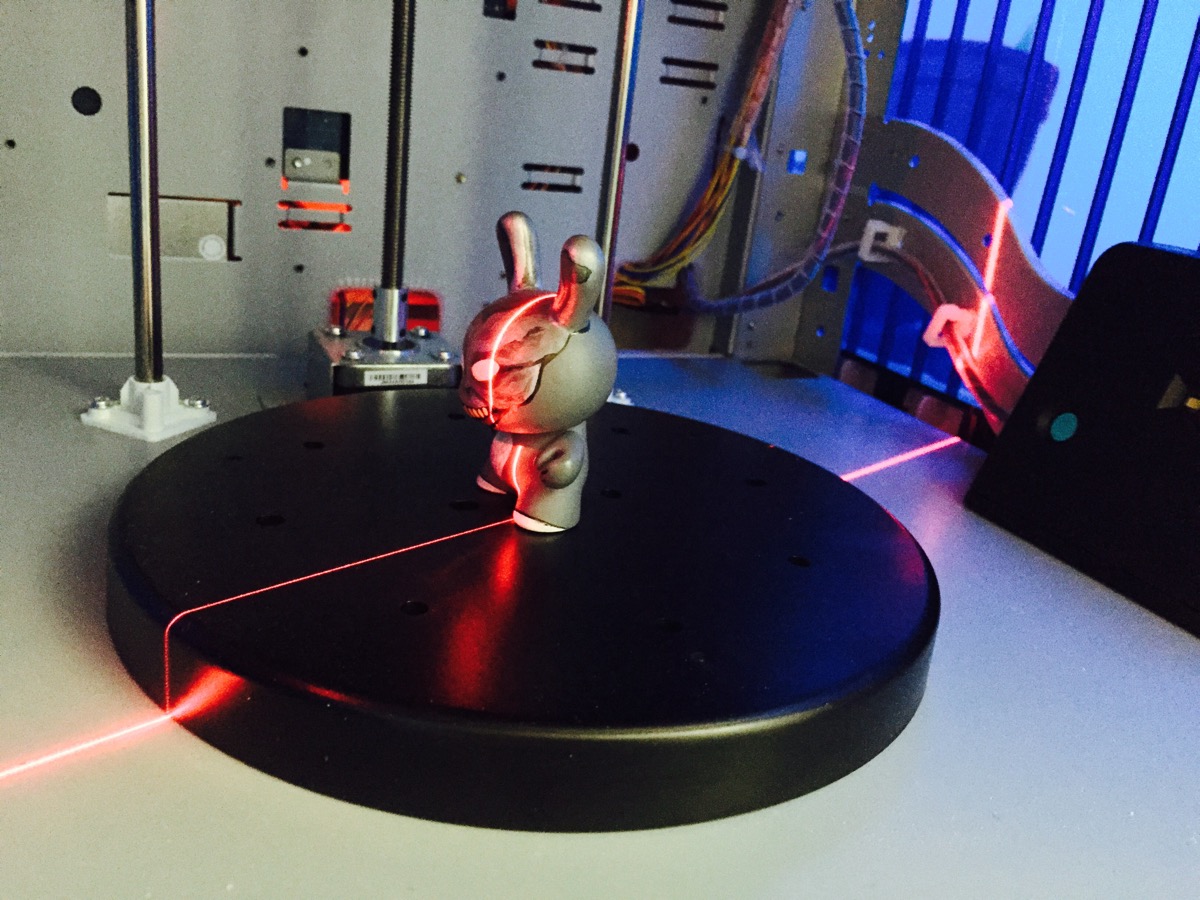 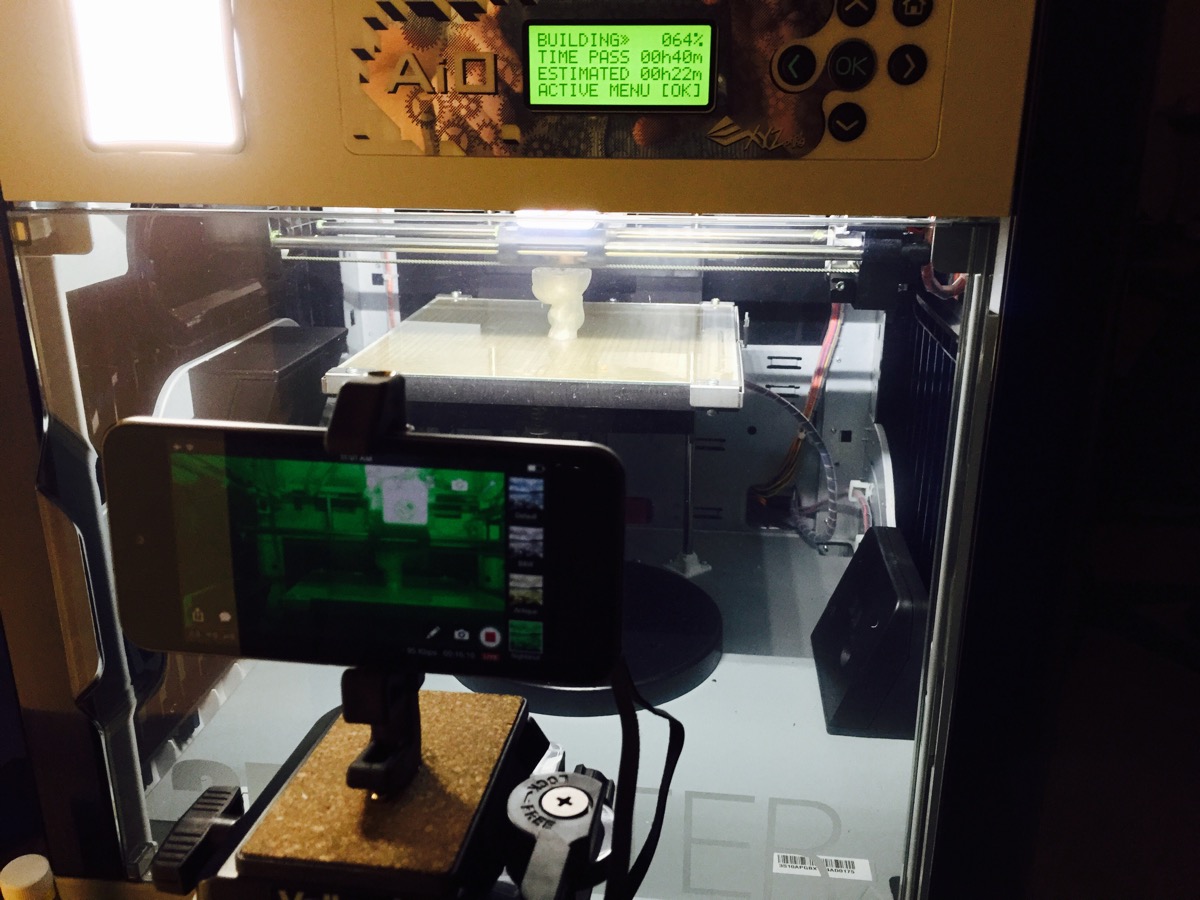 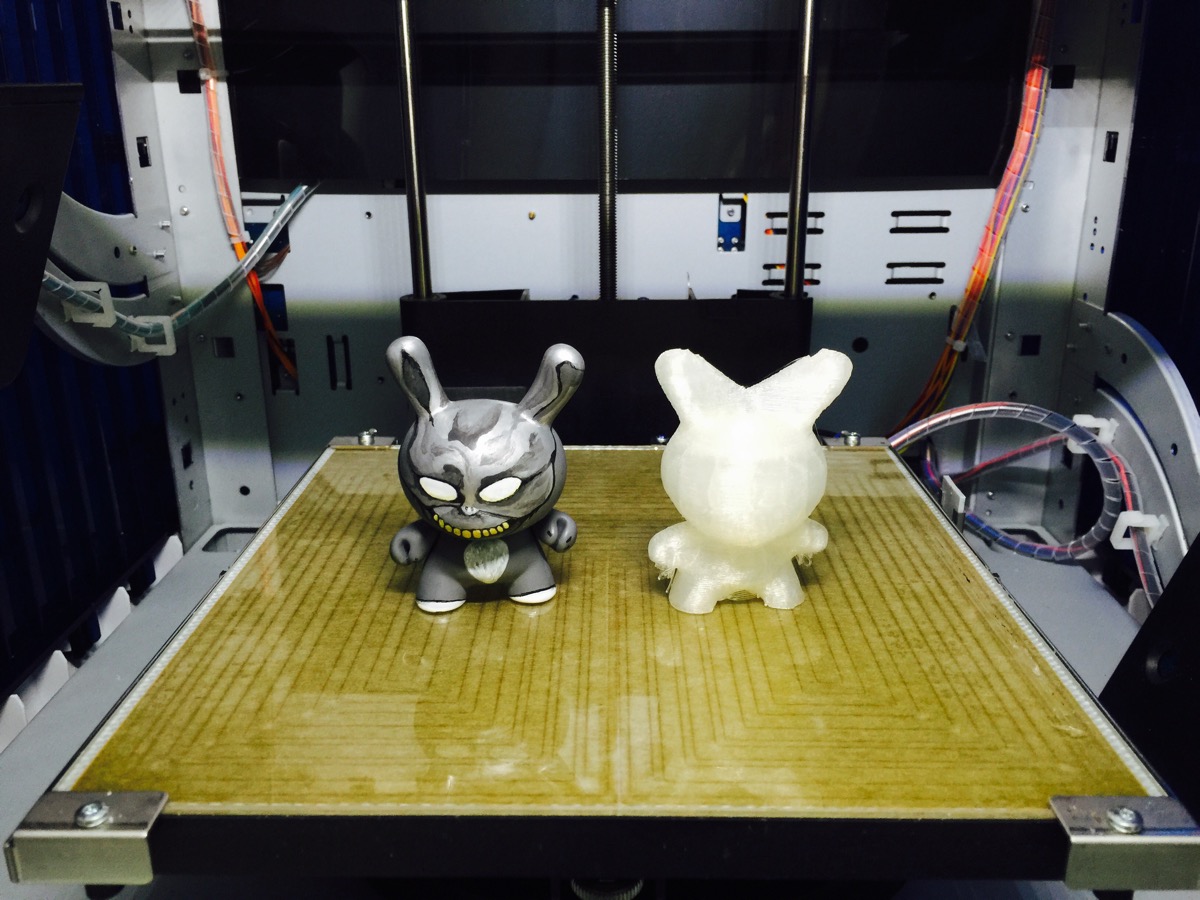 We’re printing with PLA filament - it’s biodegradable and relatively less toxic than the ABS plastic filaments - meaning we can print in the office without needing special ventilation or worrying about slowly poisoning people. And it smells vaguely pleasant as it prints. But, the PLA filament is stiff and brittle after printing, so it’s not a highly durable product. Great for prototypes and for making more-durable copies of fragile objects - which is exactly what I want to do with it. I’m hoping how to get high quality scans of delicate structures, and then try feeding it biological samples such as insects or fossils that might be too delicate to handle in class, and print out scaled-up models that can be handled by students to learn about the specimens without destroying the specimens. This part is tricker than I’d initially though, as the scanner can be fooled by the complex structures. I’m using a Hula Girl figurine I picked up in Hawaii a few years ago - guessing that the grass skirt would be a decent proxy for insect wings. I’ve tried a couple of times, without much luck. I’ll keep trying.

Shortly after the second print job, the extruder stopped extruding. We checked for jams, and it seemed clear. Next, we checked calibration (the manual says the printing bed has been pre-calibrated in the factory, and shouldn’t need adjustment, but we figured it’d be good to at least test the calibration). The measurements came in waaaaaay off. So, we needed to calibrate the printing bed. It has to be absolutely level, within a narrow range of tolerated distance from the top of the printing area. The problem is, the 3 measuring points that are used to measure calibration don’t correspond to the 3 screws that you turn to adjust the height of the printing surface. This made every adjustment an exercise in mental planar geometry. “If this corner needs to go up, that means I have to turn the screw over here up (or down?) by a bit (or a lot?)” Try it out. Remeasure. Curse, when it’s completely wrong. Repeat. A lot. We spent a collective 2 or 3 days just calibrating the printing surface, before we got it back into the tolerated range. Not fun.

Then, the first time we tried to print afterward, nothing would extrude. Our theory was that filament had melted and pooled (and then cooled) inside the printing head. That would be rather difficult to fix. I reached out to XYZPrinting support to see if they had any tips, and they sent a link to a YouTube video showing the process. I rolled up my sleeves and gave it a shot. And after an hour or so of grumbling because pieces didn’t seem to want to come apart, or go back together, as needed - it worked. I removed 2 bits of filament that must have snapped off, gave the pieces a good scrub, and slapped it all together. Back in business.

If I accounted for the hours of staff members troubleshooting and adjusting the printer, it would cost much more than the initial $800 for the printer itself. I’m optimistic that this kind of futzing becomes less needed and more routine as we get used to the printer.

When it’s working, the printer really is impressive, and offers some pretty serious bang:buck ratio. But, it can be really finnicky, and may take some time to get t back online if/when things go wrong. But, now that I’m more familiar with how all of the bits fit together, I think troubleshooting will be much faster next time(s). If I had to buy a new printer, I’d probably buy the AIO again - it’s just so much less expensive, and does a decent job (when it’s working). 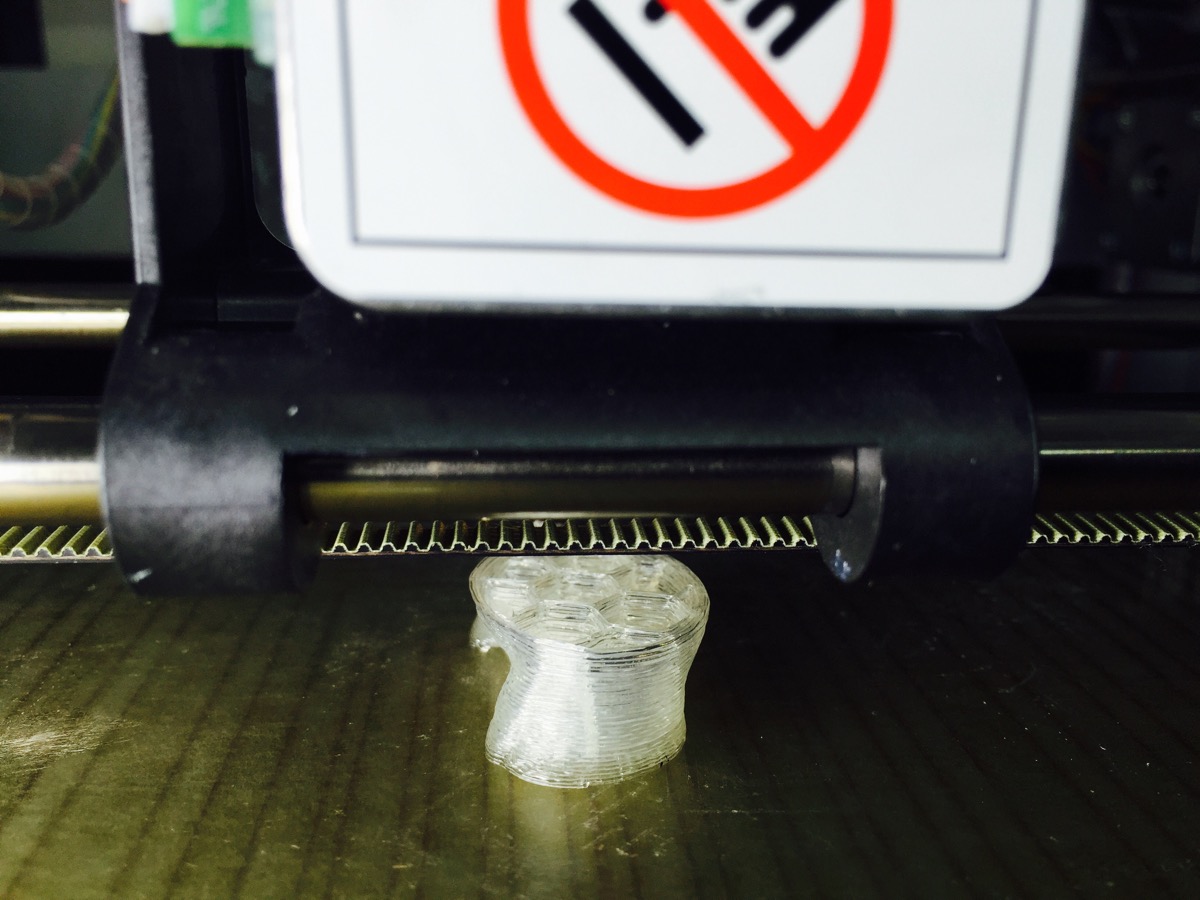