I've been forcing myself to keep thinking about (and rethinking) the concept of EduGlu - a set of tools and/or practices that would more effectively support distributed online publishing while maintaining the sense of group and community needed to make this stuff more meaningful in an educational context. I waver back and forth, between building The One True ï¿½berapp To Aggregate Them All, and a more freeform, organic, barebones directory.

I think the lightweight directory is winning. What if EduGlu was nothing more than an organic directory, where people (faculty, students, general public, etc...) are able to create folders and place links to their various locations of their own online publishing. People can create multiple groups/folders for various contexts, and add whatever relevant links they want to in each one. The directory takes care of listing the groups/folders, displaying their contents, and generating OPML containing machine-readable versions of these lists so people can then subscribe to them in their own aggregator(s). Import the OPML into Google Reader. Subscribe to it as a Reading List in BlogBridge. Import it into Bloglines, NetNewsWire, Sage, FeedOnFeeds, etc... Wherever you're happiest. EduGlu isn't about aggregating the ITEMS into one place, it's about individuals sharing their content easily. Which is done more effectively as a directory, rather than an aggregator.

I installed the BlogBridge FeedLibrary application yesterday to start teasing out parts of the idea. It's a pretty nice app (the install process could use some love, but it wasn't hard). It runs nicely on LAMP (or MAMP in my case), and it's free for academic use (not Open Source, but at least it doesn't cost anything for what I need). And it absolutely rocks at doing exactly what I just described.

The idea I'm working on is that a class creates a folder, and interested individuals (prof/teacher, students, others) create subfolders for themselves. Into these subfolders, they add entries for whatever things they publish that are relevant to this class. Could be blogs, Flickr tag(s), del.icio.us tag(s), wiki changes, or anything that they do that generates RSS.ï¿½

I'll be playing some more with it, but here's a screenshot of an early stage of the experiment: 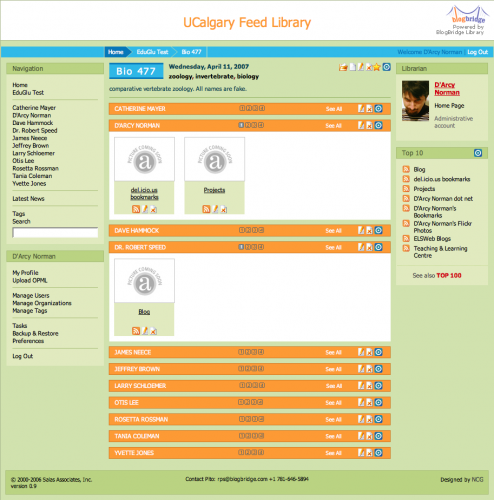 The little icons give you access to the RSS for each feed, and to the OPML containing feeds at any level of the directory you are interested in. Just want to subscribe to Dr. Speed's feeds? Grab his OPML. Want the whole class in one shot? Grab the class OPML. Want the entire department/faculty/institution? Sure! Want to just read the items directly on the directory site? BBFL will display the RSS feeds inline, so you don't need an aggregator of your own if you don't want one. Want to archive the activities of a class? Subscribe an aggregator to the class OPML, and save all items that come through. There's your academic archive.

It makes MUCH more sense to put the effort into helping make BlogBridge FeedLibrary a better tool all around, as well as for an academic context, than to build a new tool from scratch. Especially when FeedLibrary is so close to what is needed (there are some workflow issues that may need some work if unleashing it on dozens/hundreds/thousands of students, but nothing that can't be worked out).ï¿½