I've been a pretty hardcore iPhoto user since the app was originally released several years ago. It's a pretty clean app, and has done everything I've needed of a photo management app. But, lately, I've been feeling like it's a little constraining. The photo retouching tools are a bit simple, and the viewing tools require a fair amount of manual intervention.

I made the mistake of viewing the Aperture online demo video over the weekend, and realized a more advanced app would really be nicer. My home machine can't run Aperture, so I downloaded the latest beta of Adobe Lightroom and imported all of the images I've taken with the XT.

The interface is quite good - it's really different from iPhoto's more modal interface, providing drawers to get at deeper functionality without adding clutter, and having keystrokes for just about everything. I'll be playing with it more over the next week or so to see how it fits. Not sure how far I want to go down that road, though, considering it's beta software, and the final price has yet to be determined. 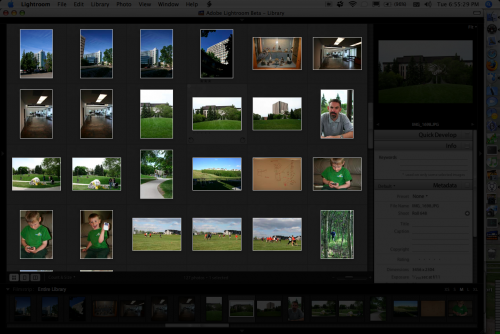 It's lacking some of the things I like about iPhoto (export to Flickr, set desktop, calendar view, etc...) but the more refined features it has may be worth it. The web exports are pretty sweet, too - including a pretty high-end flash website. I made a quick sample of a few photos I took around campus.

I'm a total photo software noob, so will be taking my time to get familiar with Lightroom, but it should be fun...